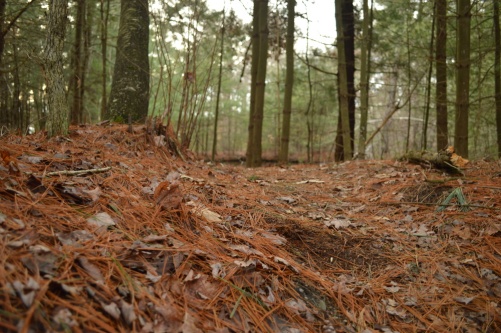 A brief excerpt from my second novel, The Old Cadet

They had not ventured far off the trail and into the forest when Derek stopped and pointed at the ground.

“Try not to step on it. This is one of the oldest living things on Earth.”

Lulu bent down and took a closer look at the vines.

“No,” Derek said with a hint of reverence, “this is a box huckleberry plant.”

“All this is one plant,” Derek pointed to low vines spread among the trees in the distance. “The box huckleberry reproduces by spreading roots and cloning itself. Individual trees and bushes come and go, but these same vines might have been clinging to this hillside for a thousand years. Maybe more.”

“And why does some mountain man care about these scraggly vines?”

“I have no idea why. But, find the box huckleberry, and you might see boomer.”

Lulu stood up. Then she turned and yelled, “Boomer! Boomer! Come out and talk to me!”

“I told you,” Derek laughed as her words echoed down the hillside. “He’s deaf.”

She gave Derek an exasperated look and bent down to grasp a sprig of the plant.

“What do you think you’re doing?”

“You may believe in folklore. I do not. I want to have this plant identified by an expert.”

“I’m serious. That really is one of the oldest living things on Earth. I wouldn’t take it.”

“You’re not one to talk,” she said as she broke off a few inches of vine. “You murder innocent animals for trophies.”

“I have a covenant with the animals. You haven’t spent enough time in the wilderness to understand it.”

“I have a master’s degree in electrical engineering, Mister Yeager,” Liu Chen said as she as she tucked the sprig into her collar. “Please don’t tell me what I don’t understand.”

“Fine,” Derek said, walking back to the trail. “Suit yourself.”

When they reached the trail, they took off running uphill again.

“So,” Lulu asked as they ran, “what is the other thing Boomer cares for?”

They stopped at the clearing on the top of Dynamite long enough to look back at the town of New Manor and the Ethan North campus. The spire of the chapel, the roof of Founders Hall, and the crown of the bell tower were below them among the trees. Then Derek led Lulu down the path on the backside of the mountain, which took them to the abandoned farmhouse and down to the covered bridge across Sherman’s Creek.

There was not much traffic on the back road. They walked into the shadows inside the bridge and examined the beams of the ancient structure. The sun shone through the gaps between the barn-board sheathing and illuminated the interior in pinstripes of light.

“Let’s take a break down here,” Derek suggested and led her to the grassy bank under the bridge. They sat against the stone underpinnings of the bridge, and he took apples and bottles of water from his rucksack.

“There are two things I wish to tell you, Derek.”

“Good for you,” Derek bit into his apple.

“Secondly, Jonathan was very happy at Ethan North. He loved the school.”

When a car came by, the timbers of the roadway over their heads rattled and rang in succession like the keys of a giant xylophone.

“Now, what brought you to Ethan North, Mister Derek Yeager?”

“You were happier here?”

“I was. It was like growing up with one hundred and sixty equally screwed-up brothers, Lulu.”

“That’s exactly what Jonathan told me,” she laid back on the grassy bank and ate her apple. “Except that he omitted the screwed-up part.”