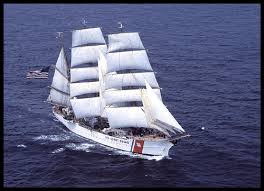 A brief excerpt from my third novel, ROYALS ALL THE WAY!

They did go below in time to get some sleep, but the wind freshened and the seas picked up during the night. When the steel plates on the deck drains above their berthing area began to slam shut with each wave that slammed into the side of the ship, none of the cadets slept. So Kyle, Melinda and Ben weren’t exactly refreshed when they were roused out of their bunks at zero three thirty hours for the dawn watch.

“Better hang on.” Ben laughed, when the ship felt like a living creature, making random movements under their feet as they dressed.

“This is spooky,” Kyle whispered when they stepped out onto the main deck and looked skyward. The sails and rigging were making giant arcs across the heavens as the ship rolled. Ragged clouds surged past the moon, which backlit the sails in an eerie gray-scale light, like a photographic negative.

The midnight watch had doused and furled the royal sails. When the salt spay came over the rail and wet their cheeks, they raised the hoods of their sweatshirts.

“It’s magnificent,” Melinda mused. The whitecaps caught the silver moonlight as if the sea were a shimmering plateau of sequins, all the way to the horizon.

“I don’t know,” Kyle doubted. “All of a sudden this ship doesn’t look that big.”

They mustered on the sterncastle and stood a trick at the wheel while the summer ensign took bearings on the running lights of passing ships on the distant horizon. There was a long whispered discussion about which lights in the sky were stars and which were planets. And they tried to piece together the constellations in the gaps between the silver-fringed clouds, which seemed to be getting lower as dawn approached.

“That’s Constellation Boeing,” Ben laughed when they all realized that one of the twinkling silver lights they were studying was not a star but a jet airliner, bound for New York or Boston.

The breeze continued to freshen and back to the south, which pushed them northward, towards the high reaches of the North Atlantic where there were icebergs in the springtime. So, in the blue-gray twilight before dawn, their watch was sent aloft to furl the topgallants.

“The wind is really howling up there,” Melinda said with a trace of reluctance.

“It’ll be sporty for sure,” Ben laughed as he scrambled up the ratlines like a hungry spider in his web. “Go large, or stay on deck.”

“You’ll be all right,” Kyle nudged her hip with his own as they started up the rigging behind Ben. “Just stay close to me.”

Ben reached the topgallant first and clambered out to the tip of the spar. Melinda was between the boys, heaving the heavy canvas up while the wind tried to pull it out of their grasp. Kyle was the tallest and strongest, but Ben was wiry and determined, and they all three worked well together.

Just as they finished lashing the sail to the spar, the first rays of the sun came between the horizon and the clouds, making Melinda’s eyes flash green above cheeks which were rosy from the salt air. Kyle raced down the ratlines ahead of the others. But when Melinda reached for the ratlines, Ben tugged on the sleeve of her sweatshirt to hold her back.

“Can you keep a secret?”

Then, without warning, he stole a long first kiss on her lips.

“Ben!” Melinda said as they stepped off the topgallant spar and climbed down the ratlines, side by side. “Never do that again!”

“You couldn’t have picked a more inappropriate moment, Ben. What if Lieutenant Brown saw that?”

“Lieutenant Brown can’t see us up here. When is a better time?”

“Never in public.” She climbed down faster as if she really wanted to get away from him. “And never on the ship!”

“Blame it on the salt air. Melinda.” He kept pace at her side as they neared the deck. “You’ve never looked more beautiful.”