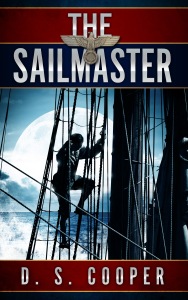 “So you’re back,” Barlow stated in a quiet voice, as he stood behind the helm and raised his binoculars to the horizon. “I knew you would sail on the Eagle again.”

“I had to come back this summer.” Riley stood to the rear of the squad of cadets on steering detail, with his hand on the spokes of one of the Eagle’s three teakwood wheels. “Especially this summer.”

This was the first midnight watch out of New London. Boatswain Barlow had given the helmsmen the command to sail Full and By. To keep the bellies of the square sails filled with air while holding a course as close to the wind as possible.

“I know,” Riley admitted. “They are forcing you to retire.”

“Pipe down, shipmate. We don’t want everyone to hear.”

Boatswain Kurt Barlow had sailed on the Eagle longer than anyone, even Captain Ross. The Coast Guard Academy the sailmaster aboard year after year for his unique knowledge of America’s Tall Ship, and because his enthusiasm for the sea and it’s lore had become an inspiration to generations of young officers in training. At a full fathom in height, with a climber’s lean frame and powerful forearms and hands, Barlow was the epitome of a sailor.

Most of all, he loved the Eagle.

“What will you do?” Riley wondered.

“I haven’t given it much thought.”

“But you’ve made a career out of the Eagle. The ship is all you’ve ever known.”

“That’s true,” Barlow muttered. But what would Riley know of such matters? He is still a teenager, after all.

Riley was silent as Barlow scanned the moonlit edge of the sea with his binoculars. Until the young sailor finally said, “Will you ever tell me your thoughts about that day, Boatswain?”

“You know that we never mention that day.”

“But this is your last chance. If you leave the ship I may never see you again.”

Then Riley leaned close behind Barlow, hanging from the spokes of the wheel.

“What do you really remember of that day, Kurt?”

“The blood,” he whispered.

The words were spoken without his turning towards the young sailor, in a low voice free of emotion or doubt, as if he were speaking to the cold dark sea itself.

“The blood. There was so much blood. Until that day, I never knew that. I never knew how much life could bleed out of one person.”

Excepted from THE SAILMASTER