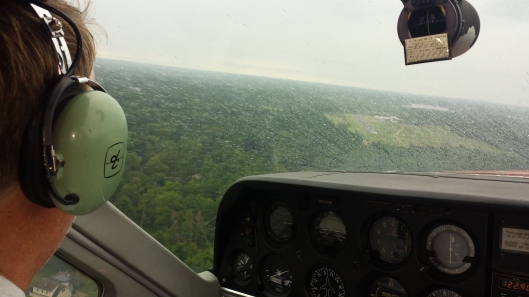 It’s always something with airplanes.

No magneto for my Cherokee yet? No problem, I hitched a ride to breakfast with Greg in his nice Cessna 177 Cardinal. The weather wasn’t great, so we stayed close to home and ate at Plane Jane’s at Plymouth Airport once again. Not a bad deal at all, since Jane’s is our favorite spot for a fly-in breakfast or lunch.

My sick Slick magneto should be back from overhaul in Tulsa this week. It’ll be good to get the Cherokee flying again. However, my third class medical certificate expires at the end of the month and I couldn’t get an appointment with my examiner until August 4th, so I’ll have to fly with someone else next Sunday as well.

How To Purchase (or Sell) an Airplane

They say that the two happiest days of a pilot’s life are first, when he buys an airplane, and second, when he sells it.

So our group wandered over to our friend Bob’s hangar at KPYM after breakfast to look at his Citabria, which he was selling to make way for a new airplane. It so happened that our friend Fred was looking for a tail wheel airplane, so we enjoyed watching the horse trading. Of course, we left them alone for the final price negotiation, but I can’t think of a better way to buy an airplane than from a friend. Especially so when another friend (Mike) has been doing the annual inspections on that airplane.

Some pilots consider the GCBC with flaps to be the best model of Citabria (Airbatic spelled backwards). I’m sure Fred is going to have a great time with it, and we’re all looking forward to seeing what shows up in Bob’s hangar next.

We flew 4 airplanes to Plymouth for breakfast this morning, and *GASP!* not one of us filed a flight plan! I can surmise that if some misfortune had befallen one of us, the news media would have ended their report of the disaster with that trite and ominous epithet, “the single engine Piper had not filed a flight plan.” Never mind that our flight was 12 miles and that on a clear day (uh … which this wasn’t!) you can see the big hangars at KPYM from the traffic pattern at our home airport. Never mind that we were well clear of the airline routes for Boston and Providence and that we took all the other usual precautions for a semi-local VFR flight. The lack of a flight plan, by itself, would mark us as irresponsible yahoos to some who have learned all about aviation in the movies and on TV.

Maybe we are. Our group of friends seldom has a destination in mind until we all meet up at Mike’s hangar. At around 8 am on Sunday morning, someone will say “Let’s go to Fitchburg,” or Katama or Minute Man. After nods of agreement, as many as 12 airplanes might take off in rapid succession and arrive at our chosen breakfast spot as a flock. We fly low and use our own eyeballs and a common frequency on our radios to avoid occupying the same airspace at the same time. There are often children onboard.

Should we have to ask for permission from our government before launching into the sky, as is the case in most of the world? Is that too much freedom?

“Hell no!” I say. America’s skies should always be free!

And if you’re lucky in life, you’ll fall in with a group of like-minded people doing something fun and free and interesting, like flying to breakfast in their own airplanes.

Plymouth (KPYM) is our “go-to” airport when the weather isn’t perfect or we don’t have as much time as we’d like. The restaurant is Plane Jane’s, and Jane herself was there to serve us with a smile. In fact, everyone at the airport seemed to be sporting a post-cookout/fireworks grin. There were friends on the ramp and in the lobby and Tom, the airport manager, had an office full of pals solving the problems of the world. What a great airport!

A cracked weld on one of my Cherokee’s exhaust risers almost kept me grounded this weekend. Luckily, Jim at the Aircraft Parts Exchange in Fort Mill, South Carolina had the part on hand. Mike had to make some phone calls and intercept the UPS truck to get the part on Friday morning (July 3 holiday) but he had my airplane back in service by Friday afternoon. I also had a fresh coat of wax from Alex’s Aircraft Detailing, new brake liners, and squeaky-new tires on the main landing gear. Which was great, because the sky was just beautiful for a sightseeing flight to Cape Cod that evening. 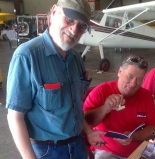 New friend George Danziger flew his Aeronca Champ down from Northampton (7B2) this week to get his Fly the Bay State Challenge ‘Passport’ stamped. The aim is to visit all 39 public use airports in Massachusetts, as well as to attend two FAA safety seminars. George is well on his way to claiming a prize, and we thank him for visiting us and Myricks (1M8).

By the way, ‘public use’ means that any aircraft may land and use the facilities of the airport without prior permission. The challenge is a great reason to go flying and explore new places for a $200 hamburger! But more importantly, it celebrates a pilot’s right to land at – and use – any airport in the USA which receives funding from the FAA.