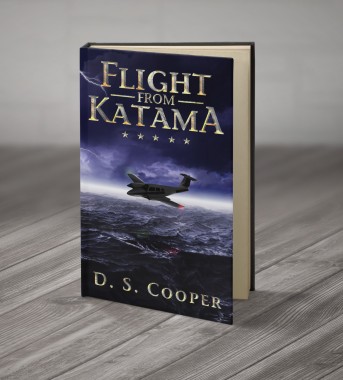 Set in 1969, this novella plays off the ‘Chappaquiddick Incident,’ with young charter pilot Billy Coates and his friends from Cape Cod tossed into the world of presidential politics by a fictional twist. It was fun to write, because I lived in Falmouth in the Seventies and I first learned to fly there. The characters came easily, since I  had known a few young locals like Billy in that seaside resort town, with his stalwart pal Ned Rogers and love interest Benedita Lopes.

Flight From Katama was my first self-published project, appearing on Amazon eight months ago. I intended it to be a short ‘Two Hour Quick Read’ which I could initially offer as a free promotion to introduce me and my writing. But readers have really responded well to the characters, so I’m planning to bring them back in a ‘Billy Coates Series’ of eBooks.

The biggest mistake I made on this project was the title. Pilots from all over the country might recognize ‘Katama’ as the popular grass airstrip at Edgartown on Martha’s Vineyard, but most readers wouldn’t know that. So given the way that Amazon suggests books by interests and keywords, ‘Flight From Chappaquiddick’ might have sold many more copies.

3 thoughts on “Flight From Katama”